Lair of Evil: WW2 prisoner escape is WW2 themed rogue-like about soviet PoW who must escape german secret facility. The main idea of the game is to transfer grim setting and melee combat to the WW2 environment.

Please note that this is a first bulid, so it is more of a work-in-progress for anyone who is interested in such a game. Please feel free to leave your feedback!

Thank you for playing the game! You did really good job by playing such an early build )

I'd like to mention several moments for those who will decide to also try it:

You can choose the same amount of positive and negative passive effects in the beginning.

Enemy attacks can't be interrapted if they already started attack animation, so player have to block or roll to avoid damage.

If you block in the last moment, you will parry and interrupt enemy attack.

I'm avare that rifles sometimes are not hitting target, will fix it.

In the second half of the video - enemy who was trying to attack the player (with knife icon above) was trapped on the first floor, so all other enemies was just waiting for their turn to attack because only one enemy can actively attack player at a time. 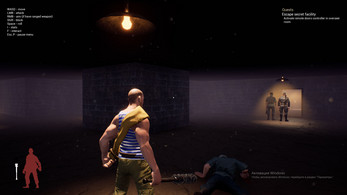